20 May ‘All of Us’ Research Program: Ensuring that medical research benefits all of us

Posted at 12:55h in All of Us, Community Engagement, Health Equity, Madison by Kevin Kiley
Share 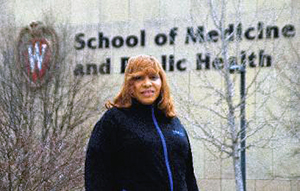 The historical relationship between medical research and underrepresented communities has been anything, but good. Either African American or other underrepresented people were ignored completely when it came to research and solutions to health problems or they became human guinea pigs. For instance, in the infamous 40-year Tuskegee study, African American men infected with syphilis were studied, but never told they had syphilis and were never given penicillin to treat the disease. None of the studies were really about them.

During President Barack Obama’s administration, a major long-term federal research program was started called All of Us.

“The purpose of this study is that everyone is a part of it,” said Lucretia Sullivan-Wade, a community outreach specialist with All of Us. “Most research studies, as we know, have not included people of color. This is one study where 50 percent of the participants have to be people who are not typically represented. We’re talking African Americans, Latinx, LGBTQ, low-income and rural residents. It has to have that representation. This study monitors that you have the representation. We are doing well. There are more than 10 sites.”

As medicine becomes more sophisticated, it has moved away from “take two aspirin and call me in the morning.” Especially with genetic research, more and more medicine will become designer drugs where they are developed or prescribed according to the physical make-up of the individual to treat cancer and many other chronic illnesses. And therefore, it is crucial that all of us are included. Read more …

Read Part Two of the article …